Posted on 19 September, 2017 in Environment, Health Have you heard of Trevor Noah the comedian? In his stand-up titled ‘Afraid of the Dark,’ Trevor cleverly weaves a message about colonisation / immigration and makes us laugh with his common sense approach to the subject, and while this is not necessarily the point being made for this blog and no ill will intended, it has relevance, and is entertaining all the same.

The British were the ones traveling the world, telling everyone of their existence, knocking on doors. “Hey, we’re the British. Follow us.” It’s basically ancient Twitter, that’s what that was. I’m not saying the British are bad people, by the way. I understand that colonization was something that was popular at one time. Many European countries participated in it. But the British were the best. They were the best. It’s not because they were bad. I think—I blame it on the weather. That’s what I think happened. I think they have bad weather, and bad weather makes you a bad person. Yeah, because if you think about it, there was no one from a tropical climate who was trying to take over the world. You don’t ever hear stories of Caribbean conquerors. Yeah, there’s no stories of, like, Troy The Terrible from Trinidad. You don’t hear these stories. There’s no need for that. When the weather is horrible, you want to go somewhere else and take it from somebody. If you’re living in a beautiful paradise, you have no need to leave. Could you imagine that scene? Just some random handsome guys hanging out on a beach in the Caribbean, one looking at the other out of nowhere. “Darius. Darius!” “What, Troy?” “I was thinking, bro. Stay with me here. I was thinking, right? We should build boats, sail around the world and force everyone to dance Calypso.” Many people from non-tropical climates often visit tropical destinations so they can share and experience the benefits of tropical life be it for the sun, sand, sea, or siestas! Perhaps still deviating away from the point a little, but since we are in the tropics… do as Darius… trying to keep with a theme here!

Its not just tropical climates that people are drawn to, people often are drawn to the ocean for a variety of reasons, be it to cool down on a hot summers day, invigorate the soul on a cold winters day, surf, kayak, snorkel, dive, SUP, free-dive, swim, fish, cruise, sunbathe, walking / running the beach, yoga, breathe in the fresh air, listen to the sound of the waves, romantic getaways, weddings, watch the sunrise / sunset, rent a beach house or perhaps even own one. For whatever the reason, we can both be drawn to and repelled by the ocean.

For those of you seeking the scientific ‘link’ for The Ocean + Human Connection, or simply interested to read on, I can definitely recommend checking out this incredible article and extract (below) from “Blue Mind” by Dr. Wallace “J.” Nichols – The Surprising Science That Shows How Being Near, In, On, or Under Water Can MakeYou Happier, Healthier, More Connected, and Better at What You Do. 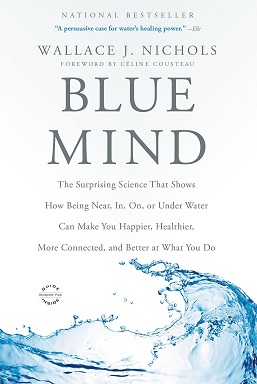 Why our brains love the ocean: Science explains what draws humans to the sea

“You didn’t come into this world. You came out of it, like a wave from the ocean. You are not a stranger here.— Alan Watts”

Check out some of our ocean paradise, located on ancient aboriginal lands, bustling with marine life, away from the artificial noises of the ‘modern world,’ – “come let go now” Xavier Rudd

*You can see Emma in the following video of one of her guided tours of Kakadu and Arnhem Land.